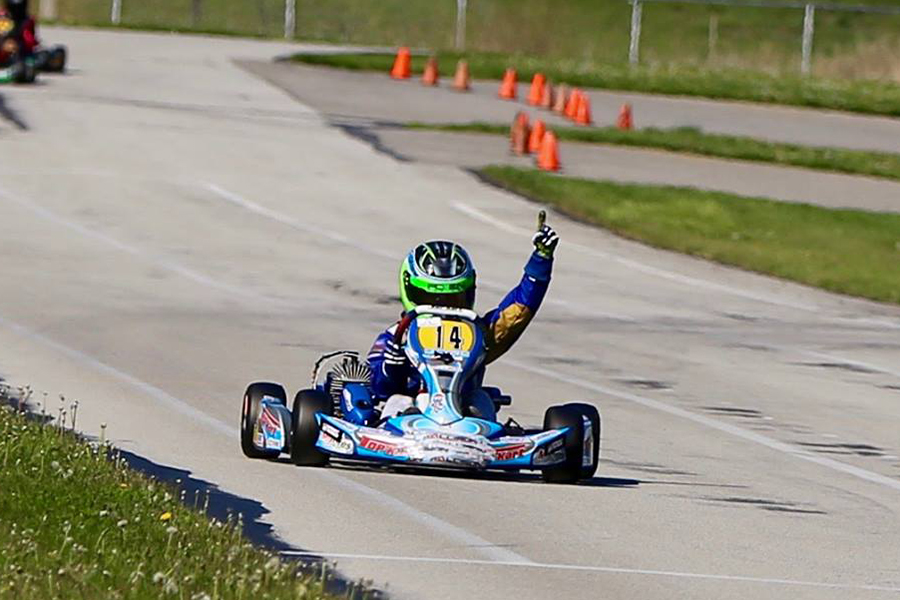 The 2016 season for the Route 66 Sprint Series began over the April 22-24 at the New Castle Motorsports Park. Roughly 340 entries traveled to New Castle, Indiana to take part in the nine categories offered for the 16th season of the program, traveling to five distinct facilities around the Indiana, Illinois and Wisconsin. It was among the largest opening events in series history, with a number of drivers earning multiple wins over the weekend.

The largest categories of the weekend were in the Yamaha divisions. Dakota Pesek bested the 24-driver field in the RLV Yamaha Senior category both days. Pesek was able to edge out top qualifier and Prefinal winner Collin Griffin by 19 thousandths of a second for the victory on Saturday. Sunday, Pesek held back Josh Fierke for the victory. Adam Crepin finished third both days with Jake Venberg and Killian Keaveny completing the top-five on Saturday, with Griffin dropping to fourth and Emily Hurlbert placing fifth Sunday.

Woltjer Racing Engines Yamaha Junior was the largest at 29 drivers competing over the weekend, all chasing Zach Pretorius. The local driver swept both rounds of competition, leading from qualifying, through the Prefinal, and taking the checkered flag in the main event. Matthew Northrop and Aidan Harrington completed the podium on Saturday as Austin Schaff and Michael Paterno were fourth and fifth. Northrop nearly stopped the perfect weekend, coming up just 95 thousandths short of the victory in Sunday’s Final. Sam Paley joined them on the podium with Dillon Schwanbeck and Schaff making up the top-five. 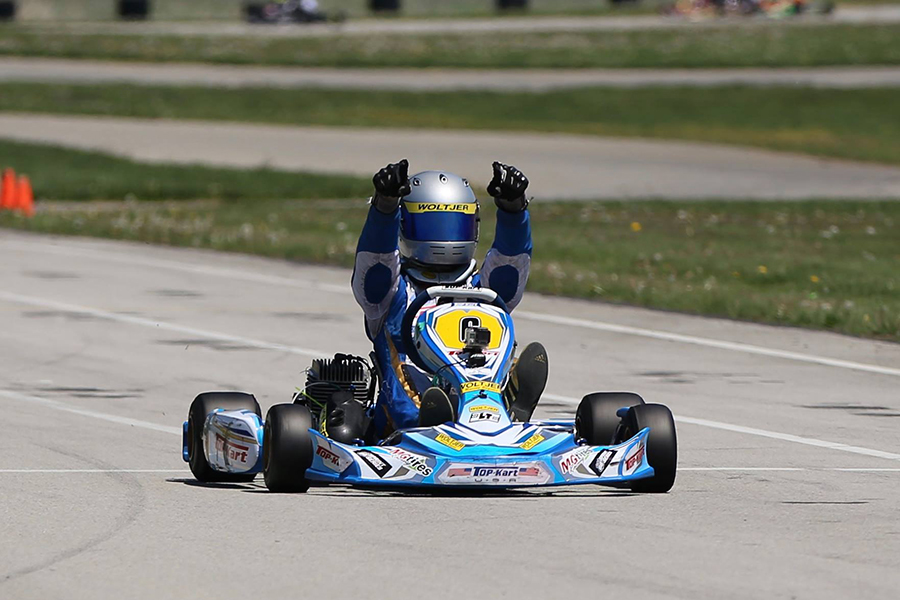 Local talent shined in the Switch Racing Engines Yamaha Cadet, featuring 28 young and talented drivers. Kaden Wharff won in a photo finish over Kyle Thome on Saturday, only 15 thousandths separating the two drivers at the stripe. Rylee Engel finished third with Logan Adams and Lucas Smalec rounding out the top-five. Sunday was all Garrett Adams as he swept the day, completing it with a two-tenths advantage over Kyle Thome. Kyle Ford advanced to the third step on the podium with Logan Adams and Wharff dropping to fourth and fifth.

Whraff won a total of three times on the weekend, including twice in the Allison Racing Engines IAME Swift Cadet class. Wharff drove away to a near five-second advantage over Kyle Thome and Taylor Maas. Nicholas Terlecki and top qualifer JJ Hansen completed the top-five. Thome came up just 64 thousandths of stealing the victory on Sunday, as Wharff completed the Round Two sweep. Terlecki, Maas and Ben Chejfec placed third, fourth and fifth.

Elliott Cox and Adam Maxwell were the stars of the Rookie categories, each sweeping the weekend in their respective divisions. Cox had things under control in the Williams Racing Engines Yamaha Rookie category. Saturday was a 10-second advantage over Christian Miles and Maxwell with Pierce Sonderup and Dean Dybdahl making up the top-five. Sunday was a photo finish with Maxwell as the two were separated by just 69 thousandths of a second. Dybdahl, Riley Erickson and Mason Cantrell filled out the top-five. Maxwell dominated the event in the Express Karts & Parts IAME Swift Rookie earning a nine-second victory on Saturday over Miles. Erickson was third ahead of Ryker Mattes and Evan Zarbo. The gap was down to just four seconds Sunday with Miles placing runner-up once again behind Maxwell. AJ Brickley won the battle for third over Cox and Erickson. 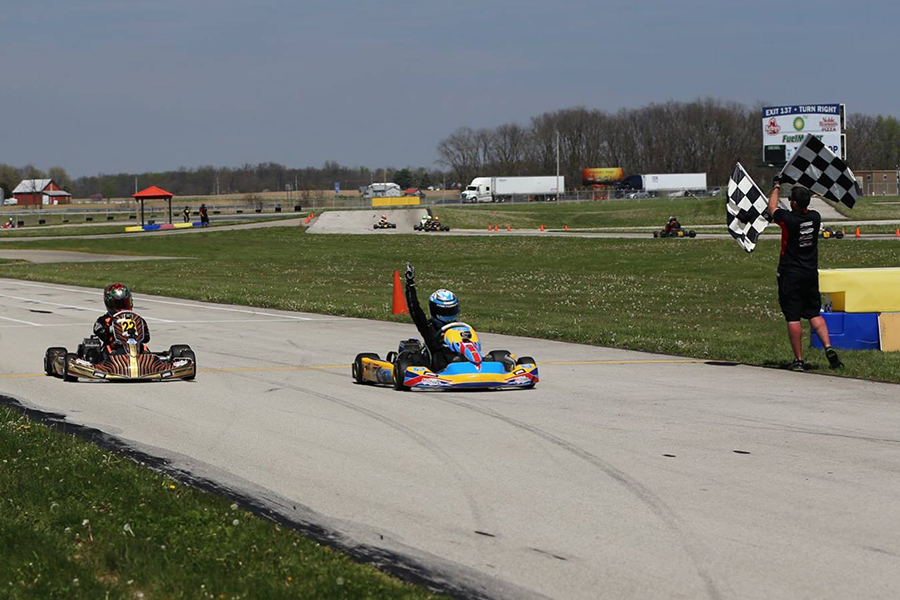 TJ Koyen was a double winner in his return to the Merlin Racing Karts IAME Senior division. Koyen was the quickest in qualifying but suffered a mechanical issue in the Prefinal, handing the win to Josh Hotz. Koyen bounced back, charging his way through the field to claim the victory by 1.8 seconds. Armin Cavkusic and David Galownia drove to podium finishes with Mick Gabriel and Abby McLaughlin completing the top-five. Cavkusic set the fast lap to begin Sunday’s round, but Koyen showed the way in the Prefinal and Final. Armin was back 1.4 seconds after the 12-lap Final with Hotz, Porter Weisensel and McLaughlin finishing third, fourth and fifth.

Stephen Dial made his Kart Craft IAME Junior class debut a success, earning victory both days of competition. Dial swept the action on Saturday, beating out Maks Kowalski to the checkered flag. Austin Schaff finished on the podium in third ahead of Sam Paley and Max Piechel. The finish was closer between the top two, with top qualifier Kowalski missing out on the win by three hundredths of a second to Dial. Sam Paley advanced to third with Schaff and Piechel placing fourth and fifth.

Indy Ragan and Austin Olds split the victories in the Hollywood Crane Service Kid Kart. Ragan fought forward throughout the day, finishing the 12-lap main event in the first position. Prefinal winner Olds crossed the line second, but was removed from the results for a tech infraction. Top qualifying Aryton Grim was advanced to second with Gage Spann in third. Dane Van Dyck and Ethan Pogue rounded out the top-five. Olds bounced back the following day, winning the Prefinal and Final. Ragan drove to second after starting out the day as the top qualifier. Kruze Miles drove to third ahead of CJ Bowman and Grim. 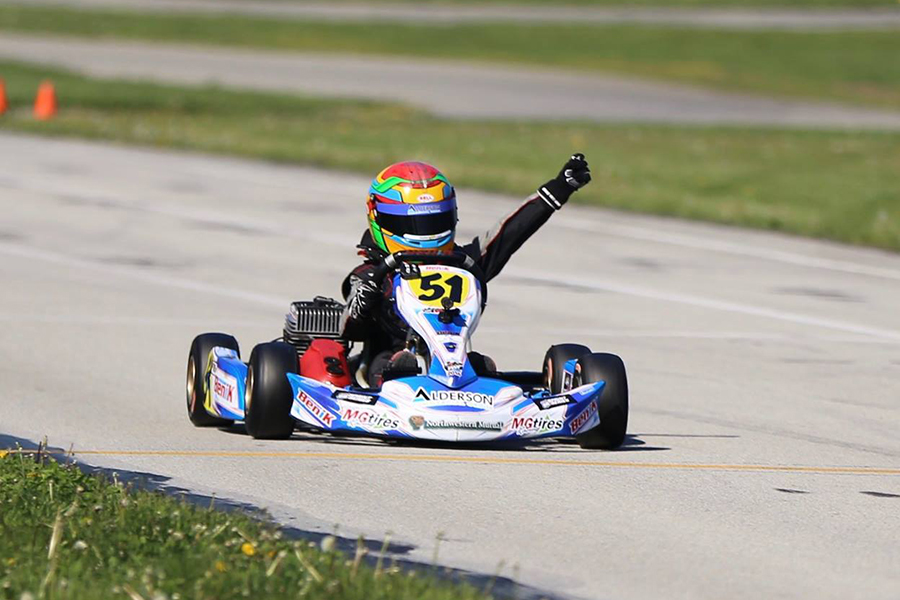 The second event for the Route 66 Sprint Series is just around the corner, as the program travels back to the US Air Motorsports Raceway in Shawano, Wisconsin on June 10-12. Last year’s event was a record turnout, featuring a total of 348 entries for the two days of racing. The same is expected for the thrilling course with many planning to use it as a warm-up for the United States Pro Kart Series event the following weekend. Online registration remains open until June 5 at Midnight, with entry re-opening Thursday, June 9 trackside. 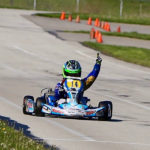