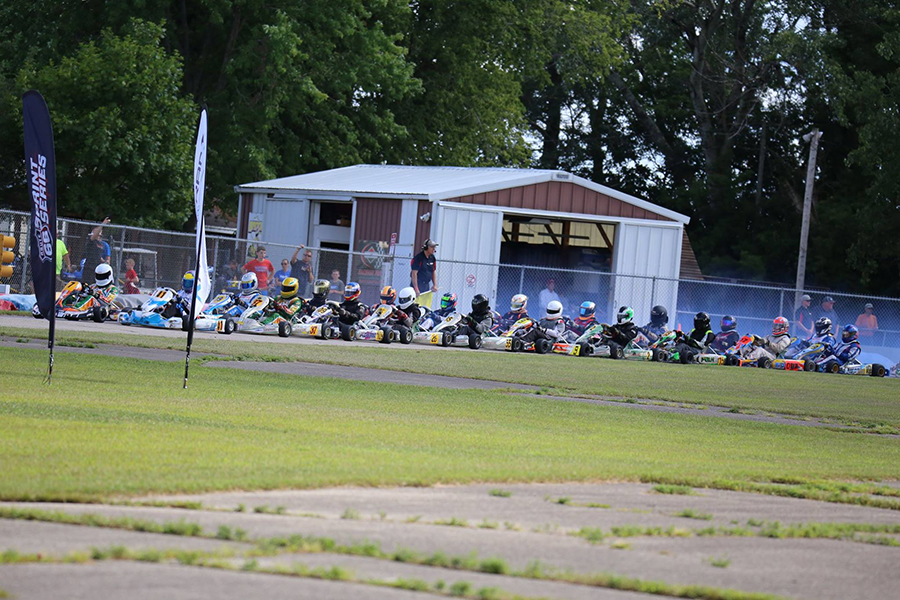 A quick turn around for the Route 66 Sprint Series competitors, returning back to action just two weeks following the third stop of the program in South Bend, Indiana. The August 12-14 weekend took racers to the Briggs & Stratton Raceway Park in Dousman, Wisconsin for Round Seven and Eight of the championship series for a faster, yet similar layout to the Michiana Raceway Park circuit. Wet weather hit Friday practice, both early and late, with raining conditions threatening Saturday morning, yet all racing action was contested in dry conditions. Host Badger Kart Club providing another amazing weekend, including a Saturday evening cookout for competitors and their families, reaching a record high for the series at the facility. A record high total highlighted the headline Yamaha Senior category while five drivers stood out on track with double wins in their categories. 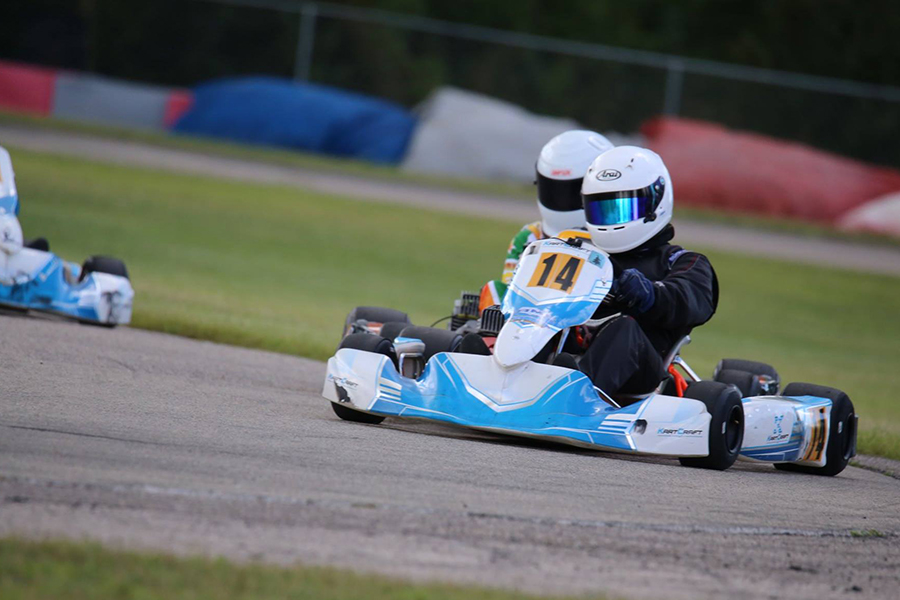 The headline category all season long has been the RLV Yamaha Senior division thanks to its large fields of top national and regional drivers. The Badger weekend brought in the highest total of the season with 32 drivers contesting the two rounds. Emily Hurlbert was the top driver Saturday, coming away with her first victory of the season. She showed the way around her home track in qualifying, with the top four including Killian Keaveny, Jason Foley and Round Five winner Adam Crepin all within nine hundredths of a second. Hurlbert was shuffled back at the start of the Prefinal, with two drivers pulling away. Keaveny crossed the line first ahead of Foley for the race win. For the 16-lap main, Hurlbert joined the top two up front, as the trio shuffled for position every lap. On the final circuit, Hurlbert was able to secure the lead and cross the line first for the victory. Foley settled for second with Keaveny getting dropped down the order to seventh on the final lap. Crepin completed the podium with Brennan Harrington fourth and Kindra Hurlbert joining her sister in the top-five. Sunday was all championship leader Dakota Pesek. After getting shut out Saturday from the top-five, Pesek swept the day to earn his sixth victory on the year. Pesek fought off Foley and Collin Griffin in the main event during what was one of the cleanest yet competitive races of the weekend. Pesek came away with the victory as Emily Hurlbert finished a close fourth and Kyle Gluth in fifth. 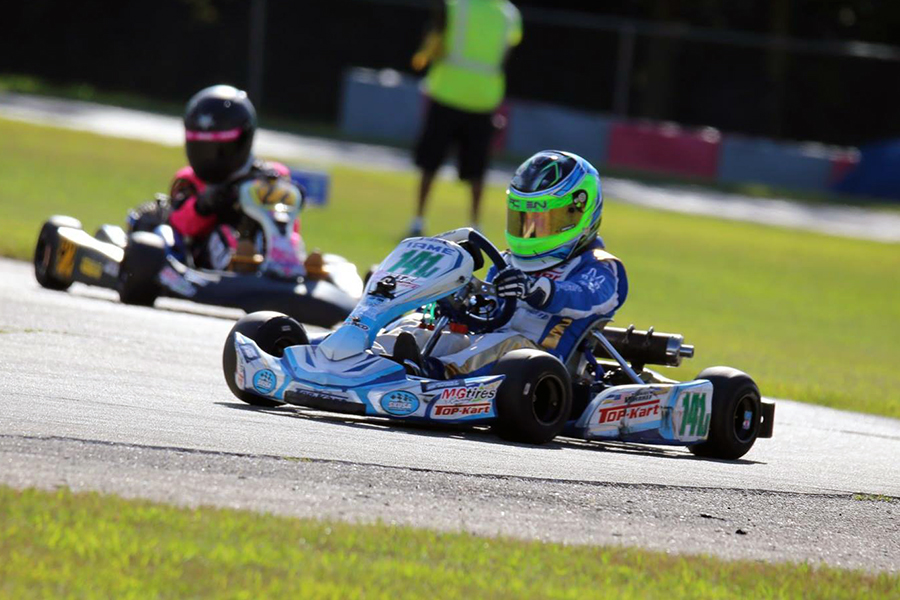 Kaden Wharff was able to double up in both Cadet divisions on the weekend, earning four trips to the top step of the podium. Wharff went from zero to hero in the Allison Racing Engines IAME Swift Cadet class Saturday, starting 15th in the Prefinal after failing tech inspection in qualifying. He worked his way up to sixth as Keegan Bosch beat top qualifier Kyle Thome for the Prefinal win. Wharff continued to steadily climb the order, reaching the first position with five laps remaining, earning the checkered flag first. At the line, Wharff held off Nicholas Terlecki for the victory by 76 thousandths of a second. Round Six winner Taylor Maas joined them on the podium in third with Bosch and Thome rounding out the top-five. Sunday was all Wharff, completing the sweep on the day. After a solid qualifying effort and big gap in the Prefinal win, the main event went down to the wire Terlecki keeping it close. The advantage was just 79 hundredths of a second at the line for Wharff taking his fifth victory on the year. Bosch finished third with Thome fourth and Maas in fifth. 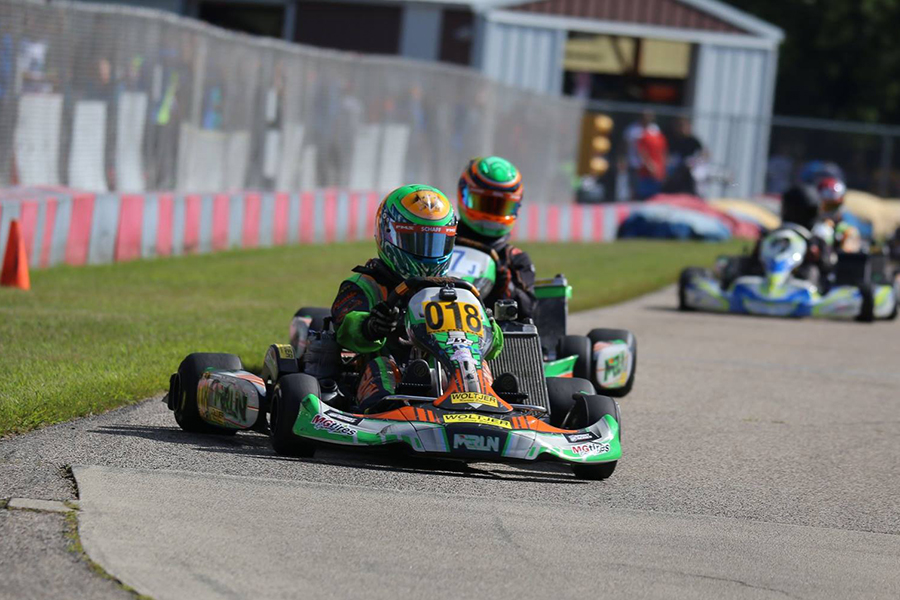 It was similar results in the Switch Racing Engines Yamaha Cadet division with Wharff coming out on top both days. Wharff was chasing top qualifier Kyle Thome and Prefinal winner Conner Churchill. The three fought for the lead throughout the 16-lap Final. Wharff led early with Thome taking over the top spot on lap five. He led until the final circuit, with Wharff able to steal the position and cross the line first by four tenths of a second. James Lynch moved up to third after Churchill retired early, with Zach Collins fourth and Logan Adams fifth. Just like he did in the IAME class, Wharff swept Sunday in the Yamaha division. After locking up fast time in qualifying and winning the Prefinal, Kaden went wire-to-wire in the Final for a 1.6-second advantage. Thome drove to the runner-up spot once again with Taylor Maas on the podium in third. Churchill drove to fourth with Adams in fifth for a second straight day.

Austin Schaff made it four straight rounds of sweeping the Kart Craft IAME Junior class. Schaff dominated the South Bend weekend and repeated the performance in Dousman. Saturday was all Schaff with fast time in qualifying and leading all 26 laps of the Prefinal and Final for his third victory of the year. Championship leader Stephen Dial drove to second with Michael Paterno winning the battle for third over Maks Kowalski and Alex Bertagnoli. Austin never relinquished the top spot all weekend, performing a similar feat Sunday as he did Saturday. Schaff went unchallenged to sweep the day, capped off by a 2.1-second advantage in the main event. Dial notched his fourth straight runner-up finish with Bertagnoli improving to third. Paterno ended up fourth with Kowalski in fifth. 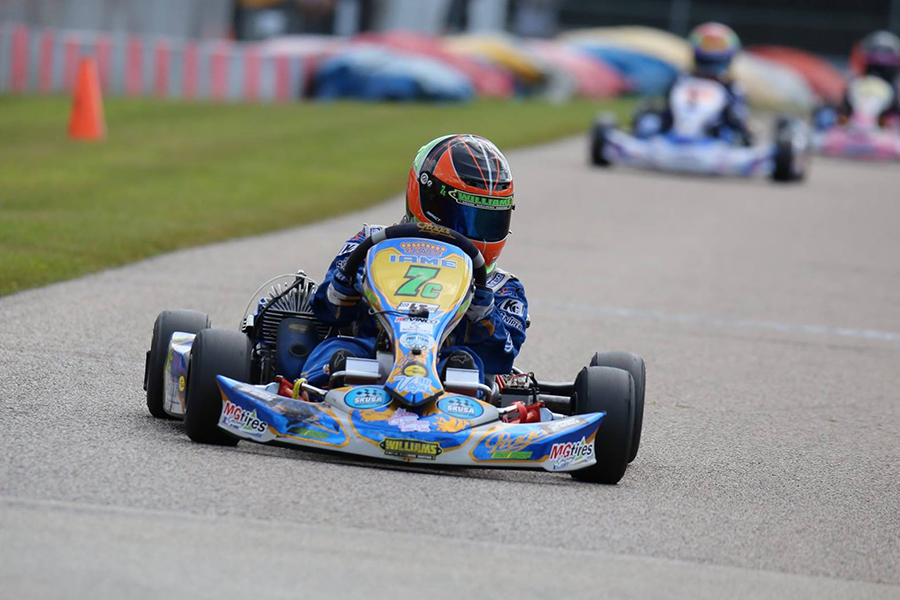 Christian Miles has put himself in the Express Karts & Parts IAME Swift Rookie championship chase with his third and fourth wins on the season. The only session Miles was not at the top of the results sheet was Saturday qualifying, placing third in the session. Miles drove his way to the win in the Prefinal, and then drove away to a four-second advantage in the main event. Championship leader Elliot Cox was second with Round Four winner Evan Zarbo third over Charlie Kremer and top qualifier Logan Julien. Sunday was all Miles as he swept the day. Qualifying came down to just five thousandths separating Miles and Cox for fast time. Miles then went on to lead all the laps of the Prefinal and Final for his fourth straight series victory. Elliot recorded his fourth straight runner-up finish with Julien improving up to third. Zarbo was fourth with Ryker Mattes in fifth. 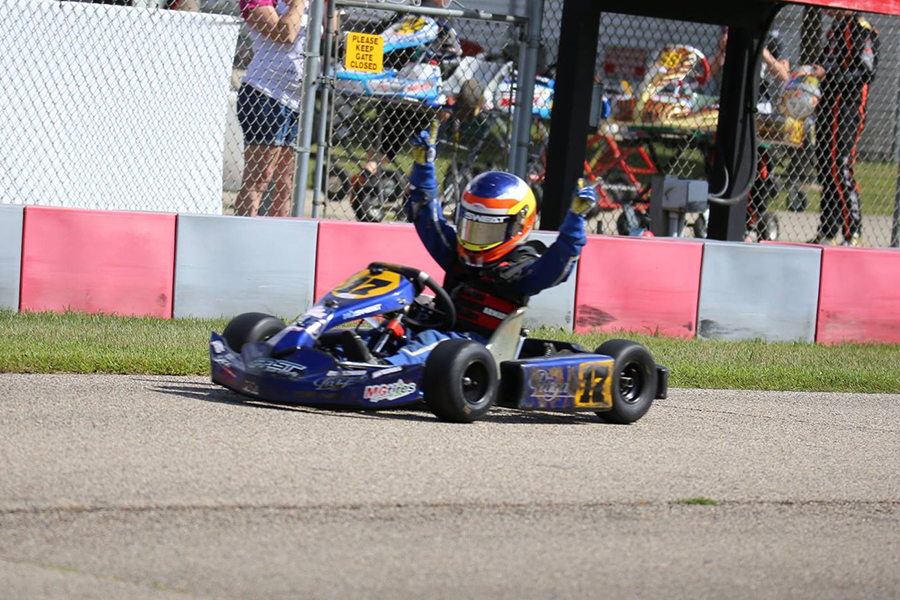 Hollywood Crane Service Kid Kart championship leader Indy Ragan added wins four and five of the season with a double win weekend in Dousman. Ragan missed out on the perfect score Saturday, losing the Prefinal to Round Two winner Austin Olds after recording fast time in qualifying. Taking over the lead early in the main event, Ragan drove to the victory over Olds. Dane Van Dyck won the battle for third over Kyle Cottingim and Jeremy Schawnbeck. Sunday began with Olds as the driver to beat, posting fast time in qualifying and winning the Prefinal. Ragan fought back in the main event, securing the top position and reaching the checkered flag first. Olds recorded another second-place finish with Sean Dixon joining them on the podium in third. Ethan Pogue and Cottingim completed the top-five. 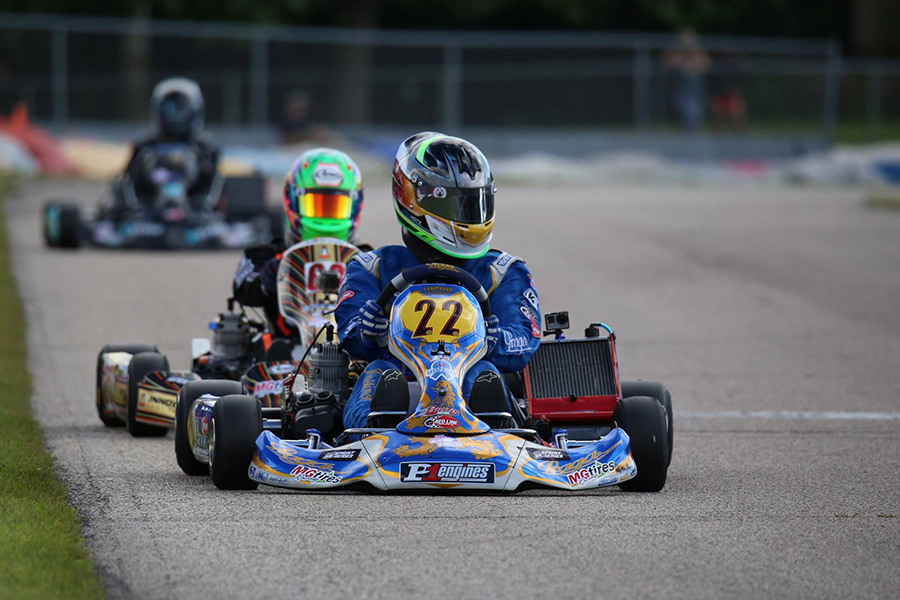 TJ Koyen and Josh Hotz have been the top two drivers in the Merlin Racing Karts IAME Senior division throughout the season as each added another win to their total after the weekend. Hotz struck first by winning Saturday’s round. Koyen set fast time in qualifying only to see Hotz steal the Prefinal win. Koyen challenged throughout the Final with Hotz holding on to the lead throughout the 16-lap race for his third victory on the season. Dylan North was third in his series debut, with Matt Stagl fourth and Adam Crepin fifth. Koyen swept the Sunday round to gain his fifth victory of the season. Koyen notched fast time in qualifying and drove away with the win in the Prefinal. Hotz took the lead early on in the main event until Koyen retook the position and stretched out to a near five-second advantage. North recorded another podium finish in third with Joseph Budzinski up to fourth and Aaron Bromberek placing fifth. 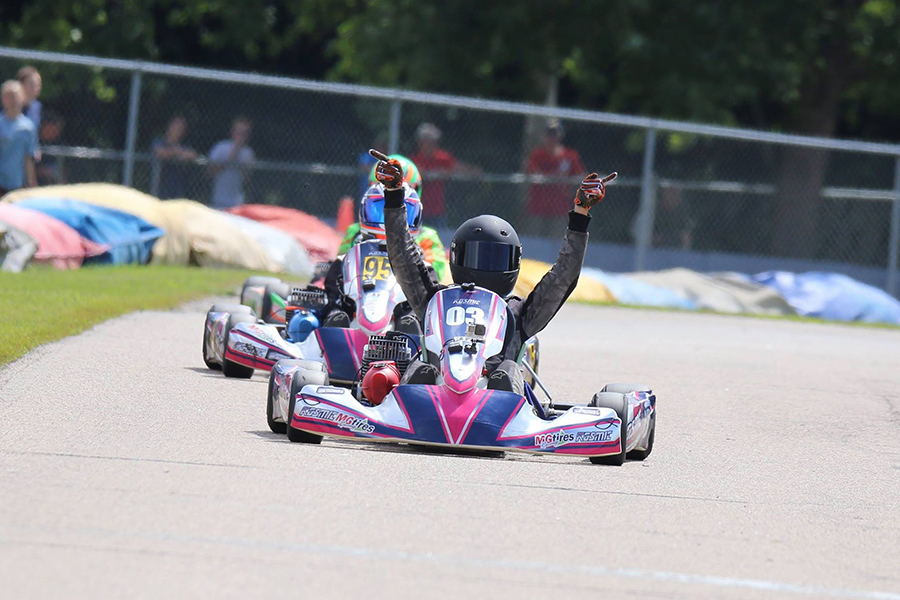 The Woltjer Racing Engines Yamaha Junior class welcomed its fourth and fifth different winners on the year in Dousman. Alex Bertagnoli won in his season debut while Michael Paterno was able to reach the top step of the podium for the first time this year. Double South Bend winner Aidan Harrington led things Saturday by securing fast time in qualifying and winning the Prefinal. Michael Paterno was able to take the lead from Harrington when the main event began, and led until the end of the 16-lap race. Bertagnoli crept up, taking the lead with the white flag displayed and driving away to the victory. Harrington held on for second with Paterno dropping out of the top-five, moving Zach Della to third, Jeremy Fierke fourth and Dillon Schwanbeck to fifth. Paterno put on a show Sunday in the main event, coming from ninth to first in the 16-lap race. Brian Rettig surprised the paddock with fast lap in qualifying, only to see Bertagnoli take the win in the Prefinal. Paterno knifed his way forward, reaching the lead on lap eight, and showed the way to the checkered flag. Della beat Bertagnoli for second with Harrington just ahead of Matthew Northrop for fourth. 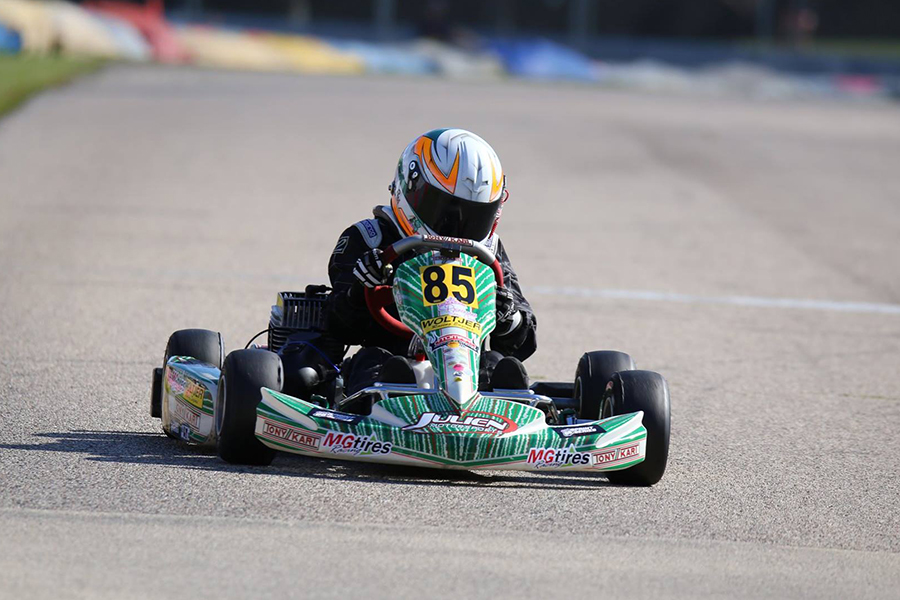 Dylan Julien and Elliot Cox each took a win in the Williams Racing Engines Yamaha Rookie category. Julien broke up the season-long win streak for Cox, earning the top step in Saturday’s main event. Cox was the top qualifier and Prefinal winner. He led the first two laps of the main event until Julien took over the position on lap three, never looking back for his first victory of the season. Charlie Kremer was second with Cox, after slipping outside the top-five early, fought back to third ahead of Kasey Williams and Pierce Sonderup. Cox scored his seventh victory on the season Sunday with a sweep of the round, capped off by a seven-second advantage in the main event. Kremer was able to secure the second spot in a great finish, holding off Julien, Sonderup and Christian Miles.

The 2016 Route 66 Sprint Series champions will be decided on the October 7-9 weekend as the program travels to the Mid-State Kart Club facility in Springfield, Illinois with online registration currently open. 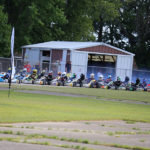