This past weekend, the Route 66 Sprint Series Presented by MG Tires and Franklin Motorsports held its third weekend of competition at Mid-State Kart Club, located just outside of Springfield, IL.  The turnout was good, given that another event was scheduled on top of this one.  There were 135 entries on Friday, and 136 on Saturday.  Mid-State folks are always great hosts and there was an additional air of excitement as the racers faced the added challenge of racing under the lights.  For many racers, this was their first time running at night, and the first Friday/Saturday program for the series.

Hot humid conditions prevailed for the weekend, so when the sun set around 8pm, it was welcomed by all.  The track at Mid-State is just over half a mile, with a long straightaway that leads into a banked monza corner.  The monza was freshly rhino coated prior to the event, so it had a ton of grip until the sun went down.  We saw passing deeper into that corner than ever before, with some drivers pulling it off from the outside.  As the track cooled though, the grip was reduced and the rear of the karts danced around a bit through that corner.  Great racing prevailed though, and there were several first time winners.  All of the feature events were run under the lights, with racing concluding each night by 11pm.  It was great to see larger fields again in the X30 Jr and Sr classes.

The Friday afternoon driver’s meeting concluded with the distribution of door prizes provided by the Series and our sponsors.  A Tillotson generator, Napoleon grill, Pelican coolers, several sets of MG tires, and PKT Axles Certificates were some of the prizes handed out to appreciative racers.

The Brinkman family and B&B Electric sponsored the race weekend.  Mid-State provided a great pork chop dinner for everyone on Saturday afternoon, including many side dishes and some awesome cake.  A great crowd turned out for the Saturday afternoon podium presentation to recognize the Friday winners, and the support was much appreciated by the racers and fans alike.

The next outing for the Route 66 Sprint Series will be August 18-19 at the newly developed Autobahn Country Club in Joliet, IL. 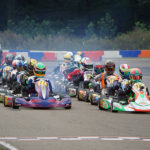